The apple, known botanically as Malus Domestica, is a sweet fruit produced on trees. The apple can be consumed in raw, cooked or commonly juiced. It’s a popular ingredient in many recipes, especially desserts.

Preservation of apples and apple products include being canned, dried or frozen. Canned or frozen apples are usually used in baked goods such as pies or pastries. Apple juice either concentrated or fresh and cider are also very common methods of preservation and consumption.

There are two types of common apple allergies. Birch-apple syndrome (or birch-apple allergy) is common in northern Europe. It is usually found in people who are also allergic to birch tree pollen.

The allergic reactions are triggered by the protein in apples that are similar to birch pollen. Sufferers of this apple allergy are often affected by other fruit and vegetable allergies as well. This reaction will only occur when consuming the fruit raw, as the allergen is neutralized during the cooking process. The variety of apple, storage condition and age can alter the amount of allergen present.

Populations around the Mediterranean regions are reported to have reactions to apples due to their similarity to peaches. An apple allergy of this nature usually exhibits more severe symptoms, such as vomiting, abdominal pain and can be dangerous. One should also note that cooking does not break down the protein causing this particular reaction. Freshly harvested, over-ripe fruits are likely to have the highest levels of the protein that causes this reaction.

Symptoms of apple allergies include:

Apple sensitivity (or intolerance) is where a person presents various digestive symptoms after the consumption of apple food products. Apple sensitivity can be uncomfortable and embarrassing for those suffering from it, despite being a less severe condition than an allergy. Often, people encounter digestive issues concerning the enzymes in apples, especially when eaten raw. Processed apple products appear to cause less adverse reactions to an individual’s digestion.

Symptoms of apple intolerance or apple sensitivity include:

Apples are often referred to as the ‘nutritional powerhouse’ due to containing a wide variety of nutrients and antioxidants. They’re a valuable source of Vitamin C which is capable of blocking some free radical damage and boosting the immune system against infections or diseases. The humble apple also contains blood-boosting B vitamins, calcium, potassium and phosphorus while being a good source of dietary fibre. 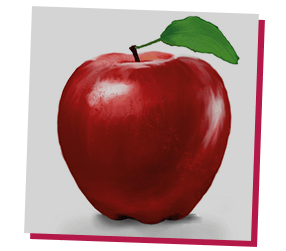 It is essential to use alternative foods in your diet when undertaking either a short or long-term elimination diet so that you maintain nutrient balance.

Below are excellent examples or nutritional alternatives when eliminating apples:

BUY NOW
UP TO 50% OFF! ORDER TODAY!
ALL TESTS INCLUDED – NO CODE NEEDED!
x